Last sightings, delivery of certificates of participation and celebration at the end of stay. 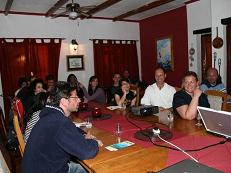 Gansbaai – «Good evening everyone, I sent you some photos that sum up the days April, 8th and 9th  2011 in South Africa.

Usual out coming by Rutzen’s boat and wonderful crew at 11.00 a.m. again because of heavy seas.

After the return to Saxon Lodge, which has become our base of operations for years, the conferences planned with all members of the expedition took place. 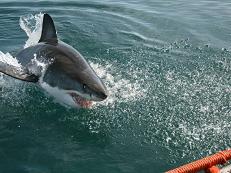 In the afternoon we went to Cape Agulhas, the most southest point of Africa (the border point between Atlatic Ocean and Indian Ocean) and in the vicinity we were in a bay to know parsnips (giant breeds). Unfortunately the visibility was very bad, as you can see from the photos. 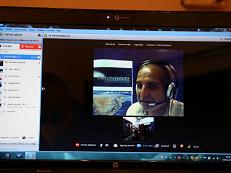 e went back to Gansbaai at 7.30 p.m. After the last lecture given by Prof. Primo Micarelli  certificates of participation in the VIII Expedition “Following the great white shark.
Were given to group’s members”. The usual videoconference with Giulio Carra (oltrepensiero.it) has been particularly long and included interviews to Mike Rutzen Sara Andreotti and, a little later, to Emilio Sperone and Primo Micarelli.
As tradition, we celebrated the end of the expedition with a typical South African meal of meat on the grill and music, especially popular Italian songs.

Tomorrow we will leave the Saxon Lodge on April, 10th at about 11.00 a.m. As we’ll reach Cape Town airport, we’ll update you on the progress of the trip. During the long delays at various airports in Cape Town and Dubai (10 hours), I intend to start putting up the missing slideshow (April 7th,8th,9th ). I embrace you all and good night (here is 2.00 a.m.).»  –  (Daniele Giglioli)