THE TEAM OF VIII EXPEDITION IS NOW IN SOUTH AFRICA, ON THE ROAD TO GANSBAAI 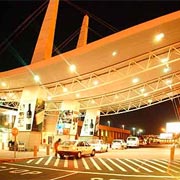 The eighteen members of the scientific expeition about white sharks by the Unit of Study and Research-Acquarium Mondo Marino by Prof. Primo Micarelli with the support of the University of Calabria and Siena has now arrived in South Africa.After the formalities of ritual concerning landing, the international airport of Cape Town, the team is traveling with a bus made available by the Divine Unlimited Shark toward Gansbaai.Waiting in the operational base of Saxon Lodge, the biologist Sara Andreotti and Michael Rutzen. In the evening the usual briefing will take place and the opening conference.
5:49 p.m – from Daniele Giglioli, “We arrived in Cape Town at 4.40 p.m. In two hours we will be at Saxon Lodge. See you later for photos ”