NO TITLE … to this story … between philosophy, science, reality and irony !

No title. This observation may have many titles, right? False?, Hidden Truth, abuse of image! Enough, otherwise I spoil all the hidden only in the title, then “no title” …

(Franco Iosa) – First I want to clarify that I am not a photographer. I frame it, shot the and the camera does all the rest; time, light exposure, ASA and more. If you interviewe me in “photography”, you will have a series of rambling answers. Today, advanced technologies allow to many of us to be very good,  almost artists. Without being subjected to questions about it, we can show our talent. We will discuss and settle every shot (digital ones that we have saved). We can also construct stories, support theories, make objective statements “look at this, I’ve the photographic evidence.”

Haaa, technologies, digital cameras with high pixel count, with which you can take unimaginable photographic sequences. Impossible for analog cameras with film (sic.. Almost obsolete). Haaa! Technologies, high performance computer and graphic art programs, which allow adjustments of any kind, corrections, light, color, depth of field and much more. I have stated I am not a photographer, anyway, even if I’m a mediocre amateur beginner, I am also a purist, “do not retouch my photos”, just scrap those “unwatchable”. However …

When I browse my photos, especially those on sharks, I realize a great truth! Or a great lie? 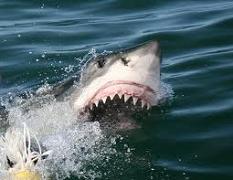 I was lucky enough to see and photograph the magnificent specimens of Carcharodon carcharias, but my greatest fortune was to be with “experts” who, to make sure that I could tell my story, guided me and made it clear what I saw and photographed. In any case, when using the image as a support, you can write a very credible version of your story, history, theory or statement. Everything depends on the purity or the manipulation of / images you use. True? False?

I will not go into a philosophical trap, I talk too much on my own, and it is enough. There aren’t no doubts, however, that very often we fall into the media ‘s traps, that use images to attract and stimulate our atavistic fears, with the intent to convince us that …

It ‘s true, when we enter into very large masses of water, seas and oceans, insinuates itself into our subconscious fear of sharks.

Let’s try this, look at these pictures:

What do you think about that?

A mouth so big, those big teeth all crooked and sharp …  certainly it is an terribly dangerous animal, aggressive, vicious, heartless and ruthless. A “Killer” with a brain that leads him only to eat anything that floats or is in its way, a scavenger of seas and oceans, and certainly the most feared of all “Killer” animals who lives the “salt watery part ” of our planet. Bites everything, it also throws the cage to release the subs that are inside …

Looking at those images you can think about anything else. With some nice history and legend around, we can argue that Spielberg, in his film, showed a great “truth.”All our fears on the shark have a foundation. No matter what kind of shark you are talking about, the word “shark” is enought. No matter to know that there are hundreds of species of different sizes, characteristics and food specialties. Thay are just sharks. Those gaping jaws, those rows of teeth, those dimensions are  clearly index of “savagery”. Just a few pictures to feed our fears and make us shudder at the back.

The picture below I offer another example: 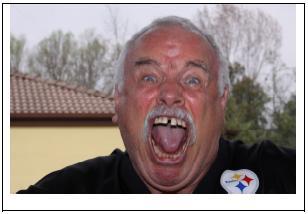 An example of Homo Sapiens Homo Sapiens that uses the “camera technology”to give an image of strength and terror. Sorry I tried, with the “show” of my big walrus teeth (mustache included), I wanted to get a bit ‘of terror, but I am sure that I only (perhaps) made you smile.

Well! What I wanted to show? With an elaborate speech and image manipulation support, you can tell your own story. Do you remember when I said I’m a purist and do not retouch my photos? However … I almost told the whole truth, I omitted that I can only show a part of the picture. Not altered, only cut. This is also still image manipulation. Let comment some “UNCUT” sequences.

(seq. 1) In this sequence, the bait is left in front of the mouth, and he was removed from the shark, that, disoriented, falls into the water without repeating the attempt (shark teased)

(seq.2) In this case, with the bait off, we see the inertial movement of large mass (shark teased)

(seq.3) The shark chases the bait, which is torn from his mouth, and mistakenly bites the cage. Then it immediately let the bite without jerk as it usually does with real prey P.s. The cage was empty (shark teased)

(seq. 4) Not always man is faster than the shark, however, the number of successes is significantly lower than failures. I should point out that there is’n any hook in the bait. (Homo teased)

Now, we have seen that our Great White Shark, was mocked by Homo. Even if the bait is right in front of the “face” of the shark is out of its sight. All that is in that “shadow” is “seen” by special sensors, in particular from the “ampullae of Lorenzini”, which guide him in the last step for the acquisition of prey. When the bait is subtracted from the one who runs it, the shark continues the trajectory and appears disoriented for the normal physical law of inertia mass, (seq. 1) or, if caught very close to the boat, it is possible that incorrectly bit into the cage without feeling any taste (seq.3).

With my elaborate story, and the collection of images, I have tried to crack the belief of someone, the wickedness and ferocity of the Great White Shark. This is just a small demonstration, that it responds to specific stimulations in relation to food, that it has predictable behavior, and it’s selective in choosing of prey.

(Seq.5) The bait consists of a silhouette of seal, the shark grabs, taste and spit the disgusting gum. (draw: The man thought to deceive the shark. The shark does not fall in an attempt to ‘trick by the man)

True? False?  I leave room for the imagination, and a greater one to curiosity. I hope I have aroused a bit ‘desire to seek the truth about the Great White Shark, as well as on sharks in general. I leave this important task to all members of the expedition, which, through the diary tells us in detail their experiences
P.S. – Remember my reflection on the Big Five, hops, sorry for the Big Six; certainly take care not to enter, without proper precautions, the land territory of the Lion or Leopard, well known for their hunting skills. What about the rhinoceros, the African buffalo and even the Elephant who, with their imposing size send us a clear message of concern and demand for respect. The “sixth”, the shark is the unopposed “King” of its territory, being equal dignity of others deserves to be known, respected and safeguarded.

Another truth. In all my attempts, the apple has always escaped my horrible teeth. 4-0 for the apple

Bye for now, your friends