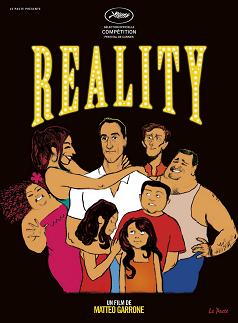 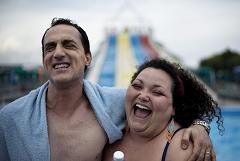 SHORT SYNOPSIS – Luciano is a Neapolitan fishmonger who supplements his modest income by pulling off little scams together with his wife Maria.
A likeable, entertaining guy, Luciano never misses an opportunity to perform for his customers and countless relatives.
One day his family urge him to try out for Big Brother. In chasing this dream his perception of reality begins to change.

DIRECTOR’S NOTE – «After Gomorra I wanted to make a different sort of film, to switch registers, so I decided to try a comedy. Reality is born from a simple but true story that we transformed in order to move through and reflect on the landscape of today. It is a journey of anticipation, of hopes and dreams. It unfolds on two levels: one external and geographical, the other internal and psychological. These levels are intimately connected, and this cultural landscape is precisely what gives rise to the characters who animate our story. This is a film about how we perceive the real, the story of a man who departs from reality and enters into his own fictitious dimension. I think of Luciano, the star of the film, as a modern-day Pinocchio, one of childlike innocence and naïveté. I followed him with my camera as if he were living a fantastic adventure. During the shooting I was constantly striving for that delicate balance between dream and reality, always searching, even figuratively, for a certain fable-like quality, a sort of magic realism.» 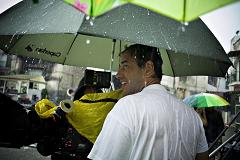 MATTEO GARRONE – Director and Screenwriter
Matteo Garrone was born in Rome in 1968. He graduated from the Art Lyceum in 1986 and worked as an assistant cameraman before focusing on painting. He won the Sacher Festival with the short film Silhouette in 1996. The following year he directed his first feature film Terra di Mezzo produced by his company Archimede, distributed by Tandem. It won the Turin International Festival of Young Cinema Jury Special Award and the Cipputi Award. He directed the documentary Oreste Pipolo – Wedding Photographer in Naples in 1998 and in the same year directed his second feature film Guests, which won the Kodak Award at the Venice Film Festival. Guests also won the Angers European First Film Festival European Jury Special Mention, the
Valencia International Golden Moon of Valencia Best Film Award and the Kodak Award at the Messina Film Festival. He directed his third feature Roman Summer in 2000 and it was presented in the official selection at the Venice Film Festival. In 2002 he directed The Embalmer which won public and critical acclaim. It was presented in the Quinzane des Realisateurs at the 55th Cannes Film Festival and won David di Donatello Awards for Best Screenplay and Best Supporting Actor, the Silver Ribbon for Best Editing, the Golden Clapperboard for Best Editing, the Fellini Award for Best Producer, Best Production Design, Best Cinematography, and Best Distribution. It also won the Pasolini Award Jury Special Prize. In 2004 his film First Love premiered in Competition at the 54th Berlin Film Festival and won the Silver Bear for Best Film Music as well as the Silver Ribbon at the David di Donatello Awards in the same category. Garrone directed Gomorra in 2008. The film won the Grand Prize of the Jury at the Cannes Film Festival, as well as Best Film, Best Director, Best Actor, Best Cinematographer, and Best Screenplay at the European Film Awards that year. It was nominated for Best Foreign Film at the 2009 Golden Globe Awards; won the Silver Hugo for Best Screenplay at the Chicago International Film Festival in 2008, and was nominated for Best Foreign Film at the BAFTA and Cesar Awards in 2009.
Garrone also produced Mid-August Lunch by Gianni Di Gregorio, which won the Best First Film Award at the Venice International Film Festival as well as many other international awards.