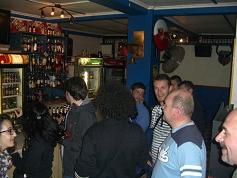 GANSBAAI –  Particularly intense days in every respect for the team of  Prof. Micarelli. Last night, after dinner at the Saxon Lodge and the video link with Oltrepensiero.it, the team was put together in a very characteristic Gansbaai’s Pub to celebrate the 200th (and beyond) sightings of a white shark from the beginning of the missions in South Africa (2003).

During the morning going out Rutzen Michael and Sara Andreotti took biological samples and then analyzed them later. 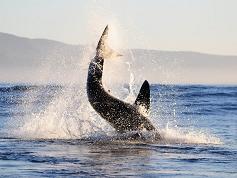 he event that surprised everyone, both for its visual spectacle and for reasons linked to data collection in the program of the expedition, at 7.40 a.m., was the “Breaching” (jump out of the water) of a white shark caused by the pulling a figure of sea lions that allowed exceptional photographic documentation.

Tomorrow (April, 7th), also for meteo-marine prohibitive conditions, the day will be used for educational and fun trips . Wake up at 4.00 a.m. with the destination Cape Town. Scheduled a safari by Jeep (Aquila Centre) and then visit to the aquarium “Two Oceans” and to the city.

We propose now, in the following page, a unique collection of photographs taken by Agostino Leone, Giovanni Parise, Primo Micarelli and Daniele Giglioli and an explanatory video, made a few years ago by the Association Posidonia, on the behavioral of the white shark’s Breaching.