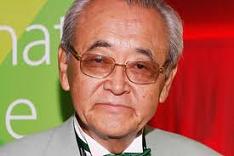 (http://2012.tiff-jp.net/en/) – Yoda was born on May 27, 1940, in Japan’s Nagano Prefecture.
After graduating in March 1963 from Meiji University in Tokyo with a degree in business management, he joined Osada Electric Co., and later Sansui Electric in 1969.
After serving as director of Sansui Electric, he established Thomas Yoda Limited (later renamed T.Y. Limited Inc.) in 1988 and moved into the entertainment-content business at Tokyo-based record label Avex, where he was Chairman of the Board/CEO from 1995 until August 2004.

He has served as Chairman of Tokyo-based film distributor/production company Gaga Communications (later renamed GAGA Corporation) since December 2004. He took majority ownership of the company in July 2009 and appointed Chairman of the Board/President/Chief Executive Officer. He also owns and heads T.Y. Limited Inc., Dreamusic Inc. and T.Y. Entertainment, as well as serves on the board of directors of movie theater operator T-Joy Co. Ltd.

In March 2008, Yoda was appointed Chairman of the Tokyo International Film Festival (TIFF & TIFFCOM). His public contribution also includes Deputy Chairperson of the Japan International Contents Festival’s Executive Committee and Executive Director of the Visual Industry Promotion Organization (VIPO). He has also been a member of the Japan Business Federation’s board of directors and Chairman of the subcommittee on entertainment and content of the federation’s committee on industrial affairs. Other contribution includes memberships in various committees of the Japanese Government.
In the past, Yoda served as chairman of Recording Industry Association of Japan (RIAJ), chairman of the Foundation for Promotion of Music Industry and Culture (PROMIC), and as a main board director of the International Federation of the Phonographic Industry (IFPI), among others.